Posted on January 5, 2019 by bobossleryahoocom

In this week’s edition of “Between the Covers,” we feature the writing team of Bob Ossler and Janice Hall Heck. Their fascinating award-winning book, Triumph Over Terror, was born of tragedy.

Mr. Ossler was a full-time firefighter in Chicago who earned a degree in pastoral ministry by going to classes part-time. He became an ordained chaplain. It took him seventeen years to complete the degree requirements.

That would be a feat for anyone, but Bob Ossler has lived with ADHD (attention deficit hyperactivity disorder) his whole life– officially diagnosed in adulthood. His ADHD made getting an education challenging especially when it came to reading and writing reports and following directions.

An ADHD diagnosis is not uncommon now, but it was something not many doctors knew about or even how to treat as Bob was growing up. ADHD makes things that the average person takes for granted – such as writing – monumental tasks. Little did Mr. Ossler know that one day, that little boy who was labeled as “naughty” and easily-distracted would be counseling and consoling people at Ground Zero and other national tragedies. He would then go on to co-author several books.

Mr. Ossler grew up in Chicago with three siblings. His mother remarried a fair but firm disciplinarian. Despite Mr. Ossler’s difficulty being able to focus and follow directions, he was good with his hands, imagination, memory, and creating things. As a young man, Bob entered the military where he trained in x-ray technology and as an emergency medical technician. Both of these prepared him for the physical requirements of disasters.

The real challenge with disaster is in one’s mind. When I asked Mr. Ossler about this, he had a lengthy reply. Normally, I would edit someone’s response but I felt in this case, it was better to hear his insightful comments because few of us will be able to talk to someone who was actually at Ground Zero and learn about the tragedy from a first-hand observer. 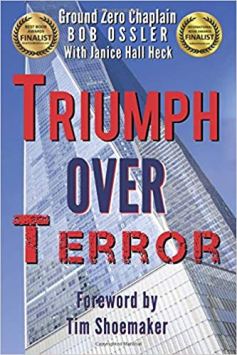 “People suffer through tragic events and often keep their thoughts and feelings to themselves. Sometimes this leads to depression or post-traumatic stress syndrome. I buried my feelings at Ground Zero. I put on a brave front because I didn’t want to break down in front of people who needed my counseling. The sights we saw traumatized us – workers, visitors to Ground Zero, and chaplains alike. The horrific sights broke our hearts and spirits – even those with the best training and experience.

I realized in meetings with other chaplains that we all had these feelings of frustration, helplessness, and inner turmoil. Each of us suffered in silence. Individually we could only help one person at a time. But together we could pray, help, and encourage each other first, then those we wanted to serve. When we shared our pain with colleagues, we felt a measure of relief. Even more so, our written words could expand our reach with the message that despite our pain, there is hope and sharing is the first step to healing.”

When I asked Mr. Ossler why he decided to write a book, he said, “The stories I had gathered while at Ground Zero would offer a tribute to those heroes who lost their lives there. In addition, I wanted to honor those workers and volunteers who spent hours in search, rescue, and recovery work. It was gruesome but necessary work. I needed to clear my head of these memories of suffering that I witnessed at Ground Zero. Writing became therapeutic for me. As I wrote, I released some of the pain of memories.”

Mr. Ossler and his writing partner, Janice Hall Heck, are currently working on a book about dealing with ADHD. Ossler says of his diagnosis, ADHD never goes away but changes at every stage of life. The trick is learning how to deal with it. In the new book, as yet untitled, Bob tells of past personal discouraging and sometimes humiliating experiences with his ADHD. Now after years of reflection, he offers strategies to help to manage those difficulties.

Bob and Janice frequently do book signings together and share stories from their book. They are also available for speaking engagements when Bob is not out of town. He is still traveling and giving care as a chaplain when tragedy strikes. You may have seen his picture and not even known it. He is frequently the chaplain people see in high-profile tragedies.

Many people get labeled and defined by the things they can or can’t do. Too many people today are told they have limitations. I cannot help but think about all the people Bob Ossler and Janice Hall Heck have impacted by sharing this beautiful and tragic story 9-11. There is a lesson to all of us who have been told what we are capable of. Some will believe it and some will step out behind a label and radically impact people’s lives. I know there are thousands of people who have been affected by having Mr. Ossler there when they need comfort the most.